I remember reading years ago in our local newspaper about an incident that happened in our community in which an infant died and the young father ended up in prison for his baby’s death. All of it just broke my heart . It was such a sad and troubling event that I made sure to speak about it with my boys. I had no clue my boys would even know the young man involved but, as it turns out, they did because they had all gone to the same high school together. I remember how Andrew rushed home after I mentioned reading about it and expressed my concern and worry. He had already known and tried to explain the circumstances as best as he could without passing judgement and imploring me to try to reserve any negative judgement because as he said “Mom. Don’t. We don’t know what really happened and right now two families are hurting enough. We should find a way to be helpful not hurtful.”
He was correct.
Two families are hurting enough.
Yes.
Unimaginable pain.
Be kind with your words.
I remember how Andrew had discussed what he knew about the young man and insisted that we not hold judgement without knowing the true character of this, or any, person. Impossible to disagree with that point. I love him for being that way. He is always that way. Andrew’s soul is still that way and I can feel him around me reminding me to look beyond what I can see. I try. He knew, as we all did, that the young man was going to go to prison and that two families were hurting enough. It truly was a sad time in our home.

I died a lot with him. Those first 8 to 12 months after he died were simply endless, joyless, painful, numb, dark and lonely days. A mother who has known the joy of the birth of a child and has experienced the tenderness of those first tears, the smell of their newborn skin, putting on their little tiny clothes and smelling the baby shampoo and talc on their soft warm skin should never have to be torn to shreds over the memory of how precious that time was. Most mothers may have those memories as building components to their children’s future and see hope and promise in them and that’s the way it should be but to be a mother and be torn to shreds by those memories knowing that those hopes and promises will never be is unnatural. It doesn’t matter at what age your child dies. It’s the same. It’s not supposed to be that way. It’s unnatural and cruel and it shreds your soul forever. Yet somehow, in a twisted game of confusion and despair, life does go on after your child dies. We keep breathing, the days pass and at first we can’t breathe and the tears are as heavy as the world’s oceans with waves of despair crashing on you relentlessly and seemingly without end. They carry a senseless tide with them as well which at first is maddening and you feel like you would rather die than live like a shipwrecked adventurer who was left to survive in the ocean with nothing but a teaspoon in your hand. Nothing makes sense at first. But as the days and months pass the Mad Hatter ocean begins to calm down and the tide of tears subsides a tiny bit. Months pass and somehow, if we allow the universe to speak to us and try to understand it’s message, we begin to try and find purpose again and eventually the days begin to shine a little light on our faces and then one day there it is: we crack a little smile as Hope sneaks her way in to save you .

Andrew was 22 when he died. He was a young adult living his young adult life and although I have always been very close with both Andrew and Alec I do not pretend to know every little detail of their daily lives and that is the way it should be.

Things weren’t always like that however. I fondly remember going through every little corner and crevice of my boy’s rooms up until they were about 13. Putting clothes away, straightening up dressers, closets and cleaning under the beds and feeling angry and amused simultaneously when I would find GoGurt wrappers or an empty packet of CheezIts from days ago and countless other surprise science experiments. But as kids grow they begin to take on a life of their own and you give them the space they need to spread their wings with the hope that maybe one or two of the pep talks you’ve given them throughout the years has settled in their souls and will help them achieve a bright and purposeful future. I’d tell them things like “Happiness comes from within and behaving kindly towards others is the seed of the happiness plant that we call a heart. Bitterness works the same way. Your actions determine which one will grow. You can choose to grow a beautiful tree which keeps producing endless fruit or a thorny bush with nothing but falling leaves year after year. It’s all up to us and our choices.” hoping that my words and actions would be followed by kind actions on their part and I would see two beautiful and strong trees producing endless fruit well into my old age. By the ages of 22 and 20 they were both starting to look like 2 beautiful and strong trees.

And then there’s life and death. You don’t plan for your children to die before you. Why would you? It’s unthinkable. It’s unnatural. It’s insane. You do not go there. Ever. There is absolutely no sane or logical reason to be prepared for the part of having to go through your child’s things after they die and how this part, of all the parts, is the time and place where your soul is shattered beyond repair. It is, by far, the worst part. It’s finding the old movie stubs, the lists of things to do that now will never get done, the parking tickets you paid and were upset about and now you’re ready to pay for tickets every day without complaint if you could just have him back. It’s the card you sent him years ago that he still carries in his backpack everywhere he goes because it meant everything to him and you didn’t know until that very second. It’s the socks that are mismatched but clean and put away that will not be worn again and it’s their scent on everything they own. Their scent is on everything and the desire to attach that to their bodies knowing you never will again is what shatters you. Going through all the things that defined him as a physical being here on earth is, by far, the hardest thing to do.
It took me days to go through his things.
Endless, sorrowful and soul shattering days.

I remember going through his desk when I found some letters from this young man who by now had been in prison for a number of years. At the time I was too shattered to even think about that for too long but I remember crying because I knew when I saw them that these letters were part of the fruit from Andrew’s tree and I had enough sense to put them in the “must keep section” of his belongings. I had no idea that Andrew was regularly writing to this young man in prison but I knew how special that was and I cried for a long time about it.

But then the ocean of grief took hold of me and I don’t remember much of what happened the following year.

I guess it did take about a year for me to get back to some of the boxes I had marked “important: keep” and when I did, I found the letters. I cried and cried again. I thought about all that had happened years ago and Andrew’s sincere concern for this young man. His care was so sincere. His sadness so thick. I wanted to reach out to this young man to let him know that he meant a lot to Andrew. I needed to let him know how important it was to Andrew to stay in touch with him. I wrote him a letter letting him know that as Andrew’s mom, knowing how my son felt about him and knowing how important these types of things were to my son, I will be here for him as well should he ever want to correspond. And then I waited. And he wrote back. And the tree is growing.

I’ve bought a book of stamps.

I can hear Andrew saying, “Mama! You’re the mama.” and he’d pat my head the way he always did followed by his goofy laugh.

This site uses Akismet to reduce spam. Learn how your comment data is processed. 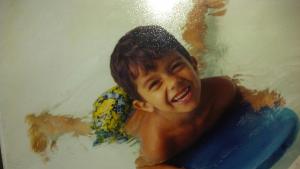 What a happy day.

Diving in the Florida Keys. One of our most favorite things to do together

The boys with Coops the Doops! 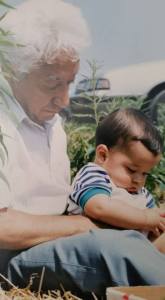 Sarasota, FL
301-655-6900
AngelaRomeroHomes@gmail.com
Up before I should be
Down after I should be

A Dad trying to cope with the loss of his Partner and becoming a single parent.

The Journey of My Left Foot (whilst remembering my son)

I have Malignant Melanoma, my son had Testicular Cancer

Where Life Is real.

Personal Views and Experience of the Universe